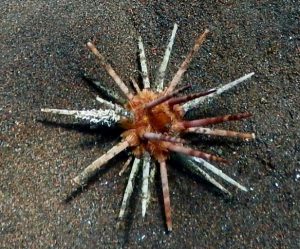 What to watch at this year’s World Health Assembly

MSF: Open statement on the launch of the Global AMR R&D Collaboration Hub

Healing an ailing pharmaceutical system: prescription for reform for United States and Canada

The Lancet Taskforce on NCDs and economics

Global alliance puts carbon capture back on the agenda

London one of worst capitals in Europe for clean, safe transport, study shows

Worried About Climate Change? Investing in Reproductive Health Must Be Part of the Solution

UN: The lazy person’s guide to saving the world

How biodiversity secures our future of food and much more

Why ODA makes sense even though it sometimes fails

Have you got data on follow-up of children after Group B Streptococcus infection? 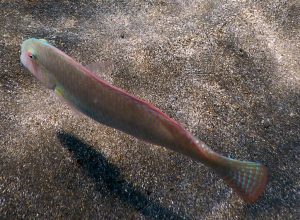 Why Ebola keeps coming back

Ebola Again: Preparedness Is Still Underfinanced, but New Opportunities Are in Play

WHO to use experimental Ebola vaccine

Panic and complacency: how the world reacts to disease outbreaks

A holistic approach to the mycetoma management

Trans Fats Should be Eliminated Worldwide by 2023, W.H.O. Says

For the world’s poorest, latest trends in climate finance are going in the wrong direction

Give Love Not HPV Campaign Coordinator

HPV Affects Everyone. Regardless of age, gender, race, or sexual orientation, the Human Papilloma Viruses (HPV) affects you, either directly or indirectly.

The most widespread and common sexually transmitted infections (STIs) in the world, there are many different types of HPV.

Studies show that more than 80% of sexually active men and women will acquire at least one HPV infection by the age of 45 years. As an infection with HPV may have no symptoms, it can go unnoticed.  Most HPV infections clear on their own, but some can lead to genital warts, and others can even lead to cancer.

In 2006, HPV vaccines began to be introduced worldwide. These vaccines are both effective and safe for both boys and girls. Along with screening, vaccines provide the possibility to significantly reduce the number of newly diagnosed HPV-related cancers.

Despite these alarming facts and the existence of prevention and screening tools, not everybody is aware of HPV, that it is associated with multiple types of cancer, and of the fact that HPV-related cancers can potentially be prevented.

To help address the lack of knowledge and awareness, the International Papillomavirus Society (IPVS) coordinated the first International HPV Awareness Day on March 4, 2018. Rather than a focus on a disease, this campaign focuses on HPV, which causes many diseases. This initiative was implemented in partnership with more than 80 organisations around world and will take place every March 4.

On social media the #GiveLoveNotHPV  increased in the online conversation about HPV by over 5000% on March 2nd – March 5th and the campaign hashtag reached 2 million unique users on social media. 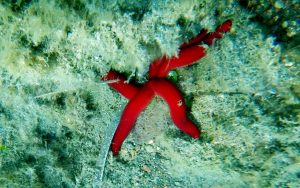 When We Build The Next Health System, Can We Break The Cycle Of High Costs And Low Value?

The next forum for unraveling FDA off-label marketing rules: State and federal legislatures

Ongoing training of community health workers in low-income and middle-income countries: a systematic scoping review of the literature

Development Cooperation Has Emerged a Winner in the EU’s 2021-2027 Budget Proposal, but the Odds Are Stacked against It

Dept. of Renewal: A Pharma Foundation Keeps the Money Flowing to Its Global Health Grantees

A Simple Way to Improve a Billion Lives: Eyeglasses

Against all odds, Yemen launches its first large-scale treatment campaign against trachoma

(S)WASH-D for Worms: A pilot study investigating the differential impact of school- versus community-based integrated control programs for soil-transmitted helminths

Fast Forward: How the Trump Effect is Accelerating Key Trends in Philanthropy

Nicaragua: the House of Cards you probably didn’t notice

NGOs tell Commission to listen to science and differentiate biofuels

Most major medical research funders are still failing to curb research waste, slowing down medical progress and threatening the attainment of several of the Sustainable Development Goals’ health targets, a new study shows.

Published in JAMA in April 2018, the study led by Nicholas DeVito of the University of Oxford shows that many of the world’s largest public and philanthropic funders have failed to put into place basic safeguards to ensure that the results of the clinical trials they fund contribute to scientific progress and global health, with public funders in China, France, Italy, and Spain performing particularly poorly.

Around half of all clinical trials conducted worldwide do not report their results, and hence make no contribution whatsoever to the global search for new treatments and cures. As a result, an estimated $85 billion invested into medical research go to waste every year. For example, a recent search of the U.S. government run registry Clinicaltrials.gov conducted by TranspariMED identified 494 completed clinical trials of potential vaccines for HIV, tuberculosis and malaria. Out of those, 82% had not posted summary results onto the registry, contrary to best practices set out by the World Health Organization. The proportion of these trials that have additionally failed to publish results in the academic literature is unknown.

For the new study, the team in Oxford selected the top 20 non-commercial funders of health research globally and examined their policies on clinical trial transparency and research waste. (Between them, these funders spent $41 billion on health care research in 2013 alone.)

Only four of the twenty top funders, Britain’s National Institute for Health Research (NIHR), Germany’s Deutsche Forschungsgemeinschaft (DFG), the European Union’s Horizon 2020 programme, and the United States’ National Institutes of Health (NIH), earned full marks for demanding that all trials they fund are registered and their results reported, and for ensuring grantees’ compliance with these rules through audits.

In contrast, public research funders in China, France (CNRS and Inserm), Italy (Ministry of Health), and Spain (ISCIII) had not even put related policies onto paper, let alone taken steps to ensure that they were followed in practice.

Which Funders Ensure that Clinical Trials are Registered and Reported? 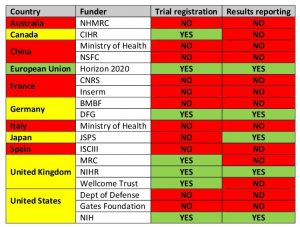 The performance of major philanthropic funders was also disappointing. At the time they were assessed, in spring 2017, neither the Gates Foundation nor the Wellcome Trust required their grantees to share the results of their research. Both organizations have since pledged to strengthen their policies and conduct regular audits of their grantees’ performance.

Clinical trials are the cornerstone of modern medicine. The negative effects of incomplete registration and reporting of clinical trials go far beyond the wasteful duplication of research efforts. For example, it can leave potential harms undetected; over 100,000 patient deaths in the United States alone have been directly linked to weak clinical trial transparency.
Opacity in clinical trials also slows down the discovery of new treatments and cures. In West Africa, efforts to contain the Ebola epidemic foundered because the results of many Ebola trials remained unknown. Unless research funders fix the system and speed up results sharing, the Sustainable Development Goals’ targets of supporting the development of new vaccines and medicines, and of ending the epidemics of AIDS, tuberculosis, malaria and neglected tropical diseases by 2030, are unlikely to be achieved.

In addition, selective reporting of trial results tends to make new and more expensive drugs look more effective than cheaper generic alternatives, leading to the misallocation of scarce public health funds, including in developing countries. For example, governments worldwide spent billions on the drug Tamiflu based on partial trial data, only to discover later that the drug was largely ineffective. Clearly, the Sustainable Development Goals’ target of “access to safe, effective, quality and affordable essential medicines and vaccines for all” cannot be achieved as long as health officials cannot even determine whether a given drug is safe or effective, let alone whether it is cost-effective compared to other treatments.

For this reason, a coalition of health integrity groups led by Transparency International recently called on governments worldwide to take decisive action to make clinical trials transparent. “In future, to help ensure that public funding for medical research actually benefits the public, government funders should only give taxpayers’ money to institutions and individuals that verifiably comply with best practices in clinical research,” the global anti-corruption group recommended. “Taking this simple first step would deliver significant transparency gains at minimal cost.”

As the transparency pioneers in Britain, Germany and the United States demonstrate, this is entirely feasible. The next step will be for global health advocates, scientists and taxpayers in Australia, China, France, Italy, and Spain to ask their politicians why they are still allowing public funds to be wasted on clinical trials that fail to adhere to global transparency norms.

Till Bruckner (tillbruckner@gmail.com) is the founder of TranspariMED, a campaign that works to end evidence distortion in medicine. He previously worked for the AllTrials campaign and the anti-corruption group Transparency International. He remains active with Transparify, an initiative to promote transparency and integrity in policy research and advocacy. In his previous life, he worked in international development, occupying both field and research roles. Till holds a PhD in political science from the University of Bristol, U.K. 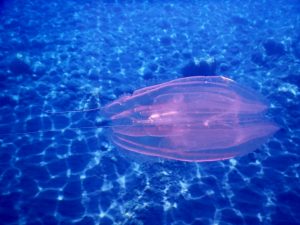 EU budget breakdown: What you need to know

Impact of the European Convention on Human Rights

WHO donors in 2017 – US, Gates Foundation, UK, World Bank, GAVI, Germany and the European Commission: Setting the Agenda for Global Health?

From surviving to thriving: What evidence is needed to move early child-development interventions to scale?

World Day for Safety and Health at Work

Why corruption thrives at the local level: insights from Bangladesh and Nigeria

What are the political drivers for GMOs in developing countries?

The long and expensive fight to eradicate polio

It’s (Past) Time We Prepare for the Next Pandemic

Patents Without Examination: A Bad Solution For The 21st Century

9 out of 10 people worldwide breathe polluted air, but more countries are taking action

Exposure to carcinogens at work in EU’s crosshairs

The new CAP: great promise or give-away? Notes on the leaked proposal