Professor of Public Health University of Aix-Marseille, and CEO at Creativ-Ceutical

The treaty on European Union states that ‘the Union is founded on the values of respect for human dignity, freedom, democracy, equality, the rule of law and respect for human rights, including the rights of persons belonging to minorities. These values are common to the Member States (MS) in a society in which pluralism, non-discrimination, tolerance, justice, solidarity and equality between women and men prevail… A high level of human health protection shall be ensured in the definition and implementation of all EU policies and activities, thus solidifying the EU’s duty to promote good health.’

On one hand lies the EU model. On the other hand, data shows that the battle against wealth and health inequality in Europe is still an ongoing feat. Eurostat data shows that Europeans from Central and Eastern Europe die younger than their Western counterparts. In their already shorter lives, around 20 years are not lived in good health. Thus, while men in Denmark can expect to live 90% of their lives in good health, men in Estonia only live 71% of their already shorter lives as healthy individuals.

The determinants of health are multifactorial and as such, the causes of health inequalities are complex. Health is determined by social and economic factors such as education, environment, lifestyle determinants, working conditions, and social protection.[1] Undoubtedly, health is also determined by healthcare systems, such as the presence of universal coverage and the price and affordability of medicines.  The European Pharma Forum in 2008 has extensively discussed the price of drugs as a cause of health inequity in Europe.

Orphan drugs, medicines intended for the diagnosis, prevention or treatment of rare diseases are central to discussions on high drug prices and low health equity. Rare diseases are usually severe conditions with no or limited choice of therapeutic options, and thus present with a high level of unmet need. Regardless of the unmet need, orphan drugs are notorious to have higher prices than non-orphan drugs rendering them inaccessible to some patients across Member States. The variation stems from the fact that although the marketing authorisation of drugs is at the European level, pricing and reimbursement decisions, and therefore patient access, are on a national level.  The European Commission, Ministries of Health of Member States, and relevant European organisations have voiced their concerns regarding health inequity and non-accessibility of orphan drugs to vulnerable population.[2],[3] As a possible solution to address these inequity concerns, several discussions on differential pricing have joined the narrative.[4],[5],[6],[7],[8] Differential pricing (DPR) ‘is based on the economic concept of price discrimination whereby prices of the same products are variedly set for different consumer groups in different geographical or socio-economic segments based on the income or purchasing power of those buyers.’[9]

Amidst the discussion on how differential pricing can offer solutions to the ongoing issue of inequitable access to drugs, it has been found too challenging to implement. The differentiation and grouping of countries based on income levels is the first hurdle. Second, due to the free movement of people and goods in Europe, parallel trade is unavoidable and thus different prices between states will cause the importation of drugs from low-priced countries to high-priced countries. This may lead to drug shortages in low-priced countries. As such, similarity in absolute prices among neighbouring countries is continuously utilised in Europe. Thirdly, the harmonisation of value assessment and the agreement on the formula for differential price calculations across member states is a high wall to climb which will not only need relevant policy change, but also significant political will and the assured cooperation of all Member States, the industry and the public healthcare systems. DPR has been effectively used in vaccines, contraceptives, and anti-retroviral treatments globally. The European Commission has considered procuring orphan drugs at the EU level but this has been faced with resistance from Member States and was not pursued.

Publications and insight on EU orphan drug access are available but these are not recent. Three publications related to the comparison of EU prices in rare diseases date from 2004–2011, when fewer orphan drugs were launched and thus are relatively less comprehensive in terms of the number of orphan drugs analysed. In more recent years, the inequitable access to orphan drugs has significantly increased as the prices have soared and the affordability in lower GDP countries has plunged.  Various studies in the literature have investigated the relevant issue of inequitable access of drugs between high GDP and low GDP countries in Europe. No study was found assessing the relative prices of orphan drugs. To appreciate this issue better, we did a study where we assessed the affordability of orphan drugs in 12 European countries.[10] We compared the annual treatment cost per patient adjusted by nominal GDP per capita, GDP in PPP per capita, % GDP contributed by the government, government budget per inhabitant, % GDP spent on healthcare, % GDP spent on pharmaceuticals, and average annual salary of similarly available orphan drugs in high and low GDP countries in Europe: Bulgaria, France, Germany, Greece, Hungary, Italy, Norway, Poland, Romania, Spain, Sweden, UK. We have uncovered that the median annual costs of orphan drugs in all countries varied minimally. However, when the annual costs were adjusted using GDP per capita, the lower GDP countries showed three to six times higher relative costs (Figure 1). 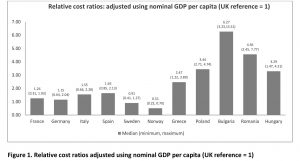 The same pattern was evident when costs were adjusted using the other economic parameters. When the costs were adjusted using average annual salary per inhabitant, the lower GDP countries showed higher costs than high-GDP countries by a factor of around 3 to 9. This means that an average individual in lower GDP countries will have to work nine times more (Bulgaria) than their western counterparts in order to afford the same drug.  To note, drug spending in low GDP countries is mostly out of the pocket which exacerbates affordability issues. GDP share contributed by the government and government budget per inhabitant show the lower per capita spending by the government in low-GDP countries resulting in increased relative costs per patient, lower ability to pay, and thus in limited access to orphan drugs for rare diseases which lack alternative treatment.

Our results validate that the current EU policy has a low ability to align access to orphan drugs across different Member States, leaving high inequity, especially between richer and poorer countries. The European model upholds the principle of equity in patient access to treatment and solidarity where the richer population subsidizes marginalized or economically challenged populations. However, these principles have not been fully achieved yet and the current inability to cater to vulnerable populations is unacceptable in more ways than one. Perhaps, to assure equal access to orphan drugs for all rare diseases, an EU-wide procurement should be considered.

It is noteworthy to observe that in the agriculture sector we have been able to put in place the EU – Common agriculture policy (EU-CAP), a complex and expensive compensation system that leads to the differential pricing of agriculture goods but which consequently benefits a large and quite rich EU country like France. The EU-CAP guarantees a stable fix price of agriculture products throughout the EU which avoids visibility and speculation on producers. As the market price of the products is often below the guarantee price, the EU pays the producers the deficit as a form of compensation. France captures 60% of this money. This means that instead of investing in economic changes and future revenue, we are investing in covering the deficit of agriculture producers who are producing at a cost that is significantly above the market price. Of note, the EU-CAP represents around 50% of the EU budget.

Why is this framework considered unfeasible for orphan drugs? The EU has considered multiple options on how to resolve the unacceptable inequity, from differential pricing with compensation, to EU global procurement for all MS and the distribution at a differential price even though the listed price is uniquely fixed, a similar process as the EU-CAP. These were never implemented. We firmly believe that there is no reason why we could not implement a similar process for orphan drugs. The EU can procure orphan drugs centrally and charge the MS based on their affordability while setting a fixed pan-European list price. Ultimately this will result in a differential pricing scheme while avoiding parallel trade at the same time.

Rare disease remains a neglected area with little empathy from decision makers and manufacturers leading to major inequity in access. New policies are needed. Equally important, alignment among Member states is needed to attain the principles set in the EU treaty. In this Union, we all look forward to the day when we will achieve the valued respect for human dignity, democracy, equality, justice, solidarity – and consequently the well-being of all people.

[1] WHO. Commission on Social Determinants of Health, 2005-2008. http://www.who.int/social_determinants/thecommission/en/