In recent years, the notion of public health, has been able to draw together and focus the attention of an increased global audience.  Amongst many factors, this shift in awareness can be credited to mainstream media agencies, who have systematically delivered informed, cross border accounts of new, spontaneous and aggressive health conditions.  The outbreak, impact and contemporary control of Ebola, as well as the more recent identification and spread of Zika virus, are good examples of how the media industry in action, can proactively help and impact upon human health.  As such, and combined with improvements in the collection of scientific data, the value and importance of both public health, and public health development, is perhaps now more clearly understood than it has ever been, amongst the global community.

Yet common awareness surrounding the concept of public health remains tied to, and associated with, advances in medicine and pharmaceutical development.  Whilst this view is not necessarily bad, or incorrect, it does detract from an underlying base of knowledge, which explains the recurring and systematic nature of poor population health.  Whilst individual lifestyles, behaviour and patterns of consumption remain important, the evidence to date, routinely identifies that poor health thrives upon poverty, poor social conditions and inequality.

In this sense, the overarching responsibility for improving public health is not stationed within the realm of the medical profession.  Nor should it be.  Public health is, by definition, a shared concept, with obligations that span a variety of social, political and economic agencies.  As such, the future development and optimisation of public health continues rests with an increased awareness of, and commitment to, this shared and interdependent relationship.

Within this collaborative relationship in mind, the media industry can also be understood to play an important and critical role in the development of human health and health related systems.  This is largely because the media is associated with presenting and describing the problems, developments and achievements that exist within both the public spaces, and communities in which we live.  Indeed, how we think about and view health problems, and what we do about them as a result, is largely determined by how they are reported by television, radio, newspapers and social media. This can mean that the ways in which health related behaviours are portrayed and sold in the media, can also be understood as an extremely powerful tool for change.

Yet in this sense, and in relation to more traditional methods of media communication such as newspapers, how can we be sure that enough is being done when the stories that are being published are of critical importance to human health?  Given its inherent value, can we be satisfied with the manner in which  public health incidents that newspapers report on, are communicated in the most meaningful way?  Do newspapers fully understand and embrace the critical role that they play, in the ‘health information supply chain’?  Aside from new pandemic threats, how are those common but often under acknowledged risks, like road traffic accidents and drowning presented to the wider consumer?  How can newspapers ensure that the composition of their stories are sufficiently challenging, engaging and contain enough preventative flavour, so as to eclipse that appetite of simple reader curiosity?

In a recent research report, these questions were considered across a range of key public health issues, as reported by two Cambodian newspapers.  The articles identified for scrutiny, appeared across two 12-month periods, 2013-14 and 2014-15.  All the articles collected for analysis, related to one of six distinct public health themes, namely:

Positive Preventative Messages (PPMs) can often be found in newspaper articles.  PPMs relate to, and add value to the centrality of the storyline, by providing additional information that helps enable the reader to understand how the outcome of a story may have differed.

This informed style of communication and journalism is different from that which typically seeks to collect, compose and report, using naked facts.  PPMs provide a balance to a story, in ways that they help the reader to understand and learn more about the science and critical elements, which underpin the circumstances, that define and characterise the story being reported.

In the absence of a recognised definition, and for the purposes of expanding the subject matter, the authors have adopted the following working definition of a PPM as:

Any term, phrase or collection of words that seeks to inform and/or warn the reader of either a) distinct circumstances, or b) alternative action, that would, could or may have prevented and/or led to a positive alternative outcome.

This working definition was used consistently for the purposes of concision and utility.

The relationship between PPMs and Public Health issues is of particular importance, especially where the known burden of disease, health and social problems are acute.  Given the latent impact that these problems and pressures have on individuals, families, employers and the wider economy, there is further value and justification in scrutinising this relationship.  As health economists routinely point out, where the concept of prevention is absent, society in its entire guise, almost always pays a high and avoidable price.

The inclusion of PPMs within national newspaper stories can be either subtle or explicit, as the fictional examples below illustrate:

Police and ambulances were called to the scene, when two motorcycles collided on Thursday morning, on a road, on the outskirts of Takeo. One man, aged 18, was pronounced dead at the scene, whilst the other, aged 54, sustained minor injuries. Both men were commuting to work when the collision occurred.

Police and ambulances were called to the scene, when two motorcycles collided on Thursday morning, on a dangerous potholed road, on the outskirts of Takeo. One man, aged 18, was pronounced dead at the scene, whilst the other, aged 54, who was wearing a motorcycle helmet, sustained minor injuries. Both men were commuting, to work, along an unlit road, when the collision occurred. Records illustrate this is the 99th fatal accident to occur, in three months, on this stretch of road between Takeo and Phnom Penh.

These examples serve only to illustrate the explicit contrast that can occur between two stories, when PPMs are adopted. One story, formed using 51 words, is devoid of PPMs, and another, constructed using 86 words, includes 5 PPMs. 35 words are used to construct the PPMs, which in turn, transforms the story. 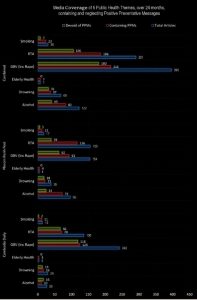 If column inches count in the media environment, then some public health thematic areas appear to capture more newspaper attention than others.  Why this happens, is still unknown.  In this respect, Elderly Health, Smoking and Alcohol appeared to be the least demonstrable out of six.  The Cambodia Daily contributed no column inches to news pertaining to Elderly Health across 2014-15, whilst The Phnom Penh Post contributed 1356 words.  Given the nature, knowledge and impact associated with smoking, both newspapers managed to communicate all of their public facing content in no more than 2500 words each.

There is a view that PPMs provide a balance to a thematic story, especially when the subject matter lends itself to preventable public health outcomes.  Reporting stories that are salient to public health, using only naked facts, invariably denies the reader of critical information that could help improve health and health literacy.  In this regard, an important relationship exists between the volume of stories, the volume of words used to construct a published story, and the volume of words used to construct PPMs that are adopted within it.  As a result, the research found that in all thematic areas, distinct contrasts existed in relation to the inclusion of PPMs.  With the exception of Elderly Health, no thematic subject areas dedicated more than 10% of its article word count to PPMs, with the majority falling short of 5%.

From the published articles that were subject to audit, it was clear that the nature of the journalism employed carried a distinct style.  It was found that significant and compelling opportunities, from which increased intervention and advocacy could have been used and communicated to the reader were absent.  In this sense significant opportunities appear to have been lost.

It is the authors’ observation that the journalism under audit, carried with it a simplistic view of what a theory of change involves.  The idea of pointing out social problems and awaiting external reform, seems a weak approach to a subject matter that exists in an environment whose population, poverty and burden of disease is well documented.

The authors suggest that an improved and positive theory of change be included as and adopted as a key element of quality assurance amongst journalists reporting on public health issues.  This approach could help fully engage the reader with information, evidence and a scope of opportunity, which can help in numerous ways, least of all, in ways that hold the subject matter to account.  This style of journalism can be achieved without necessarily drifting into the territory of campaigning or lobbying.

Philip J. GOVER is the Director of Health Squared (UK).   Graduate from Durham University Business School (UK), with an MA (Business Enterprise Management).  Additional academic studies include an MPH (Public Health) from the University of Northumbria (UK), and a BA Hons’ in Community Development from Durham University. He is a Fellow of the Royal Society for Public Health and a Fellow of the Chartered Management Institute. He has worked in developing countries in East Africa, South East Asia and various youth settings across Europe. Following 3 years’ involvement with Northumbria University Sustainable Cities Institute, he spent 12 years working as a Senior Public Health Manager with the UK NHS. Philip is a Founding Member of Health Squared, a UK Social Enterprise and Public Health Consultancy. Philip can be reached via phil.gover@healthsquared.org.

G.J. Daan AALDERS, the former director of Media Matters, graduated from VU University Amsterdam with an MSc (Political Science). He has over 8 years’ experience working in the media sector for a range of large clients across Europe and the US and is the founder of Media Matters International, a Hong Kong based research agency that provides a wide range of media services with a particular focus on Asia. In 2011, he started operations with Media Matters International in Cambodia, providing a range of clients across Europe and Asia with daily press reviews and strategic analytic media insights. Using a unique database developed for advanced analysis, Media Matters analysts have translated and analysed over 25,000 newspaper articles from Khmer and English language newspapers in Cambodia. Daan can be reached via daan@mediamatters.asia