European Citizens’ Initiative Right to Cure – No Profit on Pandemic

Ensuring fair and equitable access to safe vaccines and treatments is one of the biggest challenges of these times.

That’s why 375 European organisations have put their weight behind the European Citizens Initiative No Profit on Pandemic. Together, they have the ambition to encourage one million European citizens to sign a legislative proposal to the European Commission.

What is a European Citizens’ Initiative?

EU citizens have the right to address the European Commission directly via a European Citizens’ Initiative (ECI) in order to propose a concrete legislative amendment. When the petition collects one million signatures in at least a quarter of the EU Member States, the European Commission is legally obliged to respond to the demands. In other words: this is a powerful democratic tool.

On 30 November, 2020, a number of  European organisations, NGOs, trade unions, healthcare associations, political parties and student movements launched an ECI to demand clauses on equal distribution, affordability, accessibility and transparency of vaccines and treatments against Covid-19.

No. 1: Protecting everyone equally

In May 2021, the World Health Organization’s director called the current unequal access to Covid-19 vaccines a situation of ‘vaccine apartheid’. By September 2021, the richest nations, which make up just 13% of the world’s population, have administered 90% of all available vaccine doses.  If this trend continues, the poorest countries will simply not be able to vaccinate their populations by early 2023. At the current pace, some might even need another 57 years to get to 75% vaccination rate! 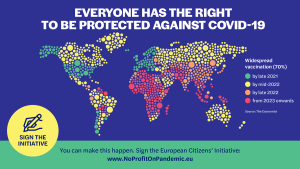 Facilitating access to vaccines for all those who need them is not only a matter of justice, it’s also a matter of common sense in the face of a global epidemic. We will only end the crisis once the emergence of new virus strains is controlled around the world.

The unprecedented speed of the development of Covid-19 vaccines, often based on new innovative technologies, has provoked legitimate questions from members of the public. Their concerns must be answered with the utmost transparency.

However, the European Commission, which has received a mandate from the EU Member States to negotiate with pharmaceutical companies, remains dangerously opaque on the conditions of the contracts. We demand full transparency on the sale prices and on the results of research and clinical trials. This is a non-negotiable step for restoring the trust of citizens.

No. 3: Demanding public control over use of public money

Since the onset of the health crisis, governments around the world have mobilised nearly US$10 billion in public funds for research and development of vaccines and other treatments against Covid-19.

But there are very few controls and conditions demanded in exchange for all these billions. Pharmaceutical companies remain free to set their prices on the sale of vaccine doses, which range from US$3 to more than US$30 per dose. Pfizer is shamelessly making a profit margin of 20-30%. At a time when millions of people are dying from Covid-19, and up to 500 million people worldwide could be pushed into poverty due to the economic consequences of the pandemic, such profits are unethical.

No. 4: Putting Cooperation before Competition

The system of patents and intellectual property rights guarantee pharmaceutical companies a monopoly on their production, marketing and pricing. Despite the enormous need to accelerate vaccine production, only Pfizer has the exclusive right to produce its vaccine for the sole purpose of guaranteeing its profits.

This is the same system that for years has prevented millions of people living with HIV and AIDS from accessing life-saving treatments. This system must be challenged to allow all countries with the capacity to produce these vaccines to do so, especially since the big contributions of public money. Steps have been taken by India and South Africa at the World Trade Organization (WTO) to suspend intellectual property agreements. But the rich countries, led by the EU, have been opposing this for a year now. Are the benefits of pharma companies really worth more than our lives and health?

No. 5: People have the power

When we reach one million signatures, the European Commission will have to respond to our demands for transparency, accountability and equal access to these life-saving products. Together, we can make sure that everyone, everywhere is safe.