Debates of Reproductive Health in Turkey

Brief History of Population Policies and Reproductive Rights in Turkey

Turkey had a pronatalist policy starting from the establishment of the Republic, till 1965. In 1959 Dr. Fişek conducted a research on 137 villages and determined high rates of infant (165 per thousand live births) and maternal mortalities (280 per 100 thousand live births). The 53% of the maternal deaths were due to unwanted pregnancies and abortions that performed in unhealthy conditions (Akın, 2007). There were approximately 500 thousand abortions every year and nearly 10 thousand maternal deaths were occurring due to complications (Fişek, 1998). In 1963 the first Demographic Health Survey was conducted and found that only 27% of the families were using family planning methods, among them usage of modern contraceptives was only 5% (Figure 1).

In 1980’s a series of health service researches have been carried out. There were several components of these researches in connection with the aims:

In 1983 a new antinatalist law was passed from the Parliament in which induced abortion is legal through to the 10th week of pregnancy on social and economic grounds, authorization of trained and certificated GP’s in performing induced abortion, authorization of nurses and midwives in insertion of IUD’s and legalization of surgical sterilization in men and women. The significant increase of maternal mortality in 1970’s and early 1980’s was the basis for the introduction of Law, which has since had tremendous success in drastically reducing maternal deaths (Akın, 2012). Legalization of induced abortion had a striking impact on elimination of maternal mortalities due to unsafe self-induced abortions. Contraceptive methods became available and accessible through primary health care centers. Family Planning services were free of charge in health centers.

In 2002 the current neoliberal and conservative government was elected. Neoliberalism has resulted in the commodification, marketization, and commercialization of health care, and the liquidation of public health services (Telli, Cesuroğlu, Aksu Tanık; 2019). In the field of reproductive health, one of the most critical initial change has been the introduction of user fees in family planning services, which were previously free of charge. In addition to this, transition from health centers to family medicine system destroyed the team approach in primary health care. The authorized nurses and midwives lost the ground of their work, Mother and Child Health Care Centers closed down.

Since its legalization in 1983, abortion had not been a serious political issue (Telli, Cesuroğlu, Aksu Tanık; 2019).

In 2007 a conservative discourse surrounding family planning services emerged. In 2008 at International Women’s Day the prime minister made a speech, claiming that families should have “at least three children in order to protect the young population structure” in Turkey (Steinvorth, 2012). This was one of the preliminary signs of the conservative rhetoric in relation to fertility.

In 2012, the prime minister made clear statements favoring pronatalism. He claimed, “every abortion is a murder” representing “a sly plan to wipe this nation off the global stage” (Radikal, 2012). With this statement an anti-abortion rhetoric emerged. Then different high-level representatives of the establishment made statements. One of them was the head of Human Rights Investigation Commission of the Parliament. He stated that abortion is a crime against humanity. Even in a situation of rape, if mother does not want to take care the baby, state can do. Also the Minister of Health made a similar statement in relation to rape. Head of Religious Affairs said that induced abortion is a murder.

At the same span of time another problem occurred; when a pregnancy test is done the result was first sent to the family physician without the woman’s consent. And the result is shared with the husband or with the father of unmarried young woman by the state. This creates ethical problems and has criminal results, such as violence against the pregnant woman, especially if the woman was not married.

Conservatism has manifested in a neo-pronatalist discourse that targets women’s freedom, including their right to access safe abortion services. The discourse used by the president and other prominent politicians, portraying abortion as “murder,” “insensitive,” and “immoral,” cultivates objections to abortion on religious and moral grounds. This leaves women who want to seek abortion services feeling guilty, creating the perception that they are doing something wrong or sinful (Telli, Cesuroğlu, Aksu Tanık; 2019). Ethical debates on abortion became a hot topic on public agenda. In fact reproductive rights should be the main justification, and women should be allowed to exercise these rights by having appropriate healthcare services (Civaner, 2012).

Visualization of the Situation with Selected Data [1]

Figure 1 displays the usage of Family Planning methods by years in Turkey.

As it is shown the usage of modern methods increased while the usage of traditional methods slightly decreased. The non-users decreased dramatically between 1963 and 1983, then gradually, but still the 26,5% of the married couples do not use any contraceptive methods. 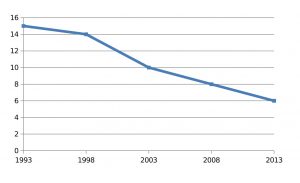 Figure 3 displays the data of total Family Planning users (modern + traditional methods) as % of married couples and Induced Abortions per 100 Pregnancies by years in Turkey. 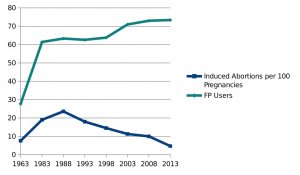 As it is shown in Figure 3, following the 1965 and 1983 regulations the usage of Family Planning methods increased up to 73,4% of married couples in 2013. On the other hand following the legalization of induced abortion in 1983 an initial increase occurred reflecting the increase of demand. Then a gradual decrease observed. Since Family Planning services became available and accessible induced abortion started to decrease indicating that induced abortion has not been used as a contraceptive method. Induced Abortions decreased to 4,7% of the pregnancies in 2013.

A draft law was prepared in 2012 in order to reduce the legal time limit of Induced Abortion to four weeks and banning abortion completely. Feminists and women’s rights groups protested this attempt strongly. Turkish Medical Association (TMA) stated that banning abortion would lead to illegal abortions and an increase in maternal mortality (TMA, 2013). Then the government withdraws the proposed law.

In 2014 the impact of the government’s pronatalist policies was also reflected in a United Nations Population Fund (UNFPA) report.

. . . the pronatalistic view and statements of the current government and increasing conservatism among the public policy and decision makers put additional stress on continuity of sexual and reproductive health services (RHS) and creates a challenging environment for UNFPA to implement its activities (UNFPA, 2014).

Collaboration of Neoliberalism and Conservatism

It appeared that public insurance was no longer covering induced abortion. In Turkey, the rationing of health care has been determined through the burden of disease surveys conducted, which manifested in the Health Implementation Guide (Sağlık Uygulama Tebliği), a version of the minimum health package. Every so often, the Social Security Institution updates the Health Implementation Guide and determines which procedures, medications, and interventions the Social Security Institution will cover. Consequently, this has a key role in determining which services physicians offer. Services provided by hospitals, need to comply with the stipulations of Health Implementation Guide (Aksu Tanık, 2018). Services included in Health Implementation Guide are attributed a code. Critically, without any prior warning, the medical curettage code for induced abortion was removed from the online registration and payment system in public hospitals (Telli, Cesuroğlu, Aksu Tanık 2019). This disabled doctors from offering induced abortion, because it no longer appeared as an available procedure let alone one covered by the insurance system, preventing doctors from fulfilling their professional duties (Francome, 2016).

Induced Abortion demand is headed to private clinics and hospitals. The lack of coverage of abortion services through the Social Security Institution and the exorbitant costs of induced abortion in the private sector mean that women from a certain socioeconomic background are excluded from accessing the service in the private sector. Taking into consideration the diminishing provision of induced abortion in the public sector, this will have the greatest negative impact on socioeconomically disadvantaged women’s access to safe abortion services (Telli, Cesuroğlu, Aksu Tanık 2019).

There are discrepancies, on all levels, between official laws and policies and what occurs in practice. Therefore, while induced abortion continues to be a right protected by Law, legality does not guarantee access to safe abortion services, particularly in a climate where the most prominent politician’s discourse and rhetoric is accepted as law (Telli, Cesuroğlu, Aksu Tanık 2019).

Privatization of primary care, fee for Family Planning services has a negative impact on availability and accessibility of these services. Decreased Family Planning usage will increase unwanted pregnancies, lack of access to safe abortion services leads to unsafe abortions. The most severe consequence of unsafe abortion is maternal death. It should not be forgotten that this was the reality in Turkey prior to the legalization of abortion in 1983, where women would seek back-alley abortions or attempt to terminate the pregnancy themselves using clandestine methods. According to the data gathered from Ministry of Health in 2016, 6% of maternal deaths occurred following an abortion (Karabacak, 2016). This data might be the first alarming sign of maternal mortality due to unwanted pregnancies.

Turkey has a very impressive history of improvement of reproductive health services; it is not acceptable to go backwards at the expense of women’s lives.

Akın, A. (2007) Emergence of the Family Planning Program in Turkey, The Global Family Planning Revolution, Three Decades of Population Policies and Programs in W C. Robinson and] A. Ross (Eds.), The World Bank, Washington DC: 85-102.

Akın A. (2012) Future perspectives on induced abortion and reproductive health services in  light of the changing population and health policies in Turkey. Turk J Public Health. 10 (1):43–60.

[1] Data collected by Turkish Demographic and Health Surveys, which are carried out every five years.