Tinnitus: is It a Lifelong Companion / a Foe for Life or does It have a Promising Future?

It is said that humans are the greatest creation of God and that humans through their intelligence can master over the world, alleviate the sufferings, reduce the mortality rates, bring in new innovations and scientific fest. In this era of rockets where the wealthy entrepreneurs invest in large fortunes in order to sky rocket one to space, it is a sad story that yet we have no scientific cure for a very common disease haunting a large portion of the world, Tinnitus.

Tinnitus is when one experiences ringing or other noises in one or both of his/her ears. The noise one hears when one has tinnitus isn’t caused by an external sound, and other people usually can’t hear it. It affects about 15% to 20% of people, and is especially common in old age. It also is a common manifestation of people who underwent chemoradiation therapies as a result of head and neck carcinomas, oropharyngeal carcinomas, nasopharyngeal carcinomas and so on. Moreover, it is also found in benign tumors, due to long –standing use of few drugs like quinine, antidepressants, aspirin, loop diuretics, Meniere’s disease, in otosclerosis, in certain metabolic disorders like diabetes mellitus, autoimmune diseases and in TMJ syndrome.

The etiology varies from person to person, and is a wide gamut in itself. In some cases, prolonged exposure to loud sounds is one of the common causes of tinnitus. Up to 90% of people with tinnitus have some level of noise-induced hearing loss that causes permanent damage to the sound-sensitive cells of the cochlea, a spiral-shaped organ in the inner ear. 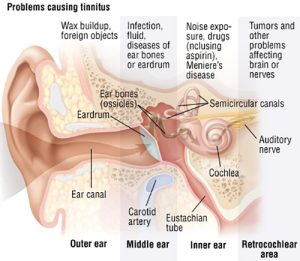 It is noteworthy that few professionals like the carpenters, pilots, rock musicians, street-repair workers, and landscapers are at high risk to develop this incurable disease.

It is the sensation of hearing ringing, buzzing, hissing, chirping, whistling, or different kinds of sounds. And the noise can be intermittent or continuous, and vary in loudness. Tinnitus is often worse when background noise is low, so one may be most aware of it at night when one is trying to fall asleep in a quiet room which can be very distressful. In rare cases, the sound beats in sync with the beat of the heart which is termed as pulsatile tinnitus. 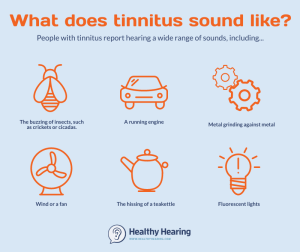 The progress of the disease is quite drastic, sometimes unilateral to start with, which may often turn bi-lateral and the severity also increases with the passage of the days so much so, that one is really incapacitated and it worsens one’s quality of life leading one to the verge of suicidal attempts. One such narrative from a patient with tinnitus in the Caribbean Islands referred to as “spending his whole fortune for the hope of a permanent relief and letting him rest in peace at night.”

In another research study, few patients were interviewed and one of them was Karin. (4) The tone of Karin’s narrative was pessimistic, although she demonstrated an urge to solve her problems besides tinnitus and noise intolerance. She started out trying to fulfill the needs of others but found that this way of life made her vulnerable and ended in a mental breakdown. The structure of her narrative is regressive and somewhat tragic as she experienced a number of obstacles to stabilizing her life. Trying to drive her own business resulted in failure several times. An uncertain work situation seemed to influence her emotional reactions to both loud sounds and tinnitus. As a teacher in music, she experienced a worsening of tinnitus after giving several days of music lessons, also making her more concerned about her hearing. Karin stopped playing the guitar for some time, as tinnitus made her play out of tune. When standing in a gathering with people she had difficulties coping with noise or loud voices. Often it forced her to leave the place, because she didn’t know “what to do.” When tinnitus was exhausting, it often led to headaches and vertigo. During an interview, Karin brought up memories of a passed long-term depression, a condition that she worried she could experience again. Tinnitus had an impact on her patience, and it became more intense when she felt frustrated. The theme in the narrative seemed to be a struggle to reach what she wished to obtain for her future life.

This condition can worsen in some people if they take alcohol, smoke cigarettes or drink caffeinated products. For reasons not yet entirely clear to researchers, stress and fatigue seem to worsen tinnitus.

All that we have as treatment in our platter are the hearing aids which have practically no permanent solution, sound maskers, retraining therapy, some handful relaxation techniques and few medicines as hormones, anti-anxiety drugs and topical anesthetics.

It is very startling that apart from avoiding the reasons causing this tinnitus, there is no actual permanent cure. When science has progressed to such dimensions as Artificial Intelligence and Robotics and Tele-surgeries, then why do we fail to comfort our own people on this beautiful planet? Is it not amazing that when so many people worldwide are suffering from this painful disorder, scientists are blowing their minds and harping on a lot of funds on things that are practically of no human benefit on this Earth. Have we, the scientific fraternity ever asked ourselves why this big lacuna exists in our medical world which is just a shameful affair? Had we done this fruitful exercise, we could have been successful in bringing smiles to many innocent faces. Is the scientific world still pondering or are they geared up to really bring a big change in the upcoming years? Let this food for thought carry us to the point when we will find a permanent cure and declare that all human beings can live and sleep peacefully, and then only can we sing like the legendary Pop star Michael Jackson…..Heal the World,  make it a better place, For you and  me, and the entire Human race.

By the same Author recently on PEAH