Hepatitis C virus (HCV) infection can be cured now thanks to highly effective oral direct-acting antivirals (DAAs). But it remains only a distant dream for most who need it worldwide. We must fight HCV DAA bank-busting price tags, and the intellectual property regime and the industry behind it, that collude to undermine public health

Fighting for Hepatitis C Treatment Access: We Cannot Repeat the Mistakes of the HIV Epidemic

Over the past year, news headlines across the globe heralded the arrival of a cure for hepatitis C virus (HCV), which kills 500,000 people each year (more than 185 million are estimated to be infected). The advent of oral direct-acting antivirals (DAAs) that are more effective, simpler to administer, easier to tolerate, and are taken for a shorter duration than previous standard of care has led experts to predict the potential of global HCV eradication. But as new DAAs pour onto the market, questions about access, particularly in low- and middle-income countries (LMICs), loom large.

Gilead’s Sovaldi (sofosbuvir), one of the first DAAs to receive regulatory approval in the US and Europe, is considered the backbone of the new HCV standard of care. Sovaldi is priced at US$84,000 for a three-month course. Harvoni, Gilead’s combination therapy, a once-a-day pill approved for HCV genotype 1, costs US$94,500 for the same duration. For people in LMICs, home to 85% of people with HCV and the majority of the world’s poor - more than a billion living on less than US$1.25/day, according to the World Bank – this extortionate pricing is tantamount to a death sentence.

Even high-income countries in Europe, and the US, and Australia, have balked at DAA high pricing. In the US, Medicaid (a federal program that pays for medical services for low-income citizens) has rationed and outright denied these new medications to patients due to their high price tag. States such as New York, California, and Illinois are basing treatment eligibility on cost considerations, not medical criteria.

In November 2014, hepatitis C activists in New York State traveled to Albany, the state capitol, to protest restrictions to HCV DAAs that include:

-Denying HIV/HCV-coinfected patients treatment if, in the past 6 months, they have had detectable HIV RNA viral load

Approaches that limit rather than expand access are increasingly common, in the US, Europe and Australia where DAAs are on the market but too expensive for national and local healthcare programs. The result is disastrous for people living with chronic HCV, which, untreated, causes serious liver disease including cirrhosis and liver cancer, and death. “We don’t make HIV-positive people in New York wait for treatment until they have AIDS, we don’t tell people who eat meat that they can’t be treated for heart disease, and so we shouldn’t withhold HCV treatment from people who need it. New York should not backslide into unethical cost-cutting,” pointed out Tracy Swan, Treatment Action Group (TAG) Hepatitis/HIV Project Director and participant in the protests.

For people in LMICs, prospects for accessing new DAAs are even more dismal. DAA producers like Gilead and Bristol-Myers Squibb (BMS) have not registered their drugs in most of these countries. Their recently announced global access plans reflect a greater interest in emerging market profit-seeking than expanding access to treatment in developing countries, which is their stated goal.

Gilead’s voluntary license to 7 Indian generic companies, publicized in September 2014, allows sales of cheaper generic versions of their DAAs in only 91 countries (at time of announcement). Gilead excludes 73 million people with HCV from the deal, including 30 million in China, and other high-prevalence countries like Brazil, Russia, Thailand, Ukraine and the US, where need is greatest; while “beefing up” the scope of their license with many low-prevalence small island nations. BMS’ plan (“business as usual,” according to Médecins Sans Frontières) covers just 90 countries, similarly denying affordable access to nearly half of the worldâs people with HCV. 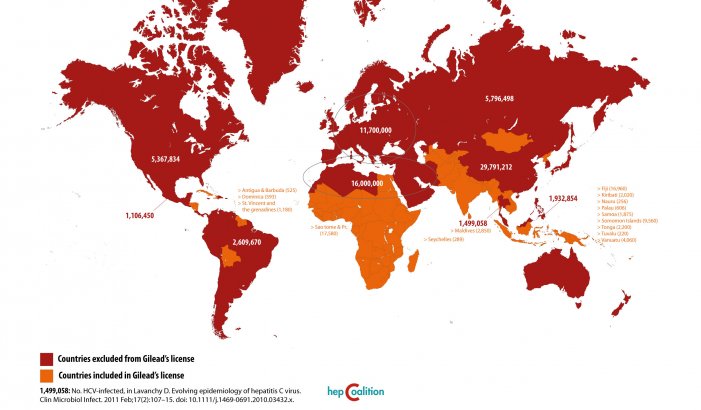 The global HIV/AIDS treatment access movement demonstrated the critical role of competition among generic drug makers to help drive down the price of treatment. The price of standard HIV medications dropped by 99 percent as a result. Also, communities of people living with HIV/AIDS and allies advocated to their governments to utilize legal safeguards in international trade agreements and domestic law, including compulsory licensing and patent opposition, so locally produced or imported generic versions of antiretroviral therapy (ART) could be made available. Without widespread access to generic ART, millions of lives would have been lost.

Andrew Hill and colleagues have shown the minimum cost to produce HCV DAAs generically is only a fraction of their market price. Combination treatment, including genotype testing and treatment monitoring (and providing for a 4% profit margin) could cost just US$177-444.

Governments have an obligation to promote the highest attainable standard of physical and mental health for its people. According to the World Health Organization (WHO), every United Nations Member State has ratified at least one international human rights treaty recognizing the right to health. Therefore, governments –regardless of resources –must make progress toward fulfilling this right. The UN and multilateral funding agencies such as the Global Fund to Fight AIDS, Tuberculosis and Malaria (GFATM), have an instrumental role to play in helping to increase the capacity of governments to successfully address HCV.

In May 2014, the World Health Assembly, the policymaking body of the World Health Organization (WHO), unanimously passed a resolution calling for stepped-up action on viral hepatitis from the WHO Director-General and Member States. The WHO issued their first-ever HCV treatment guidelines, to encourage countries develop plans and programs. These are significant advances, pushed for by activists on the ground who are engaged in raising awareness, building treatment demand, and advocating for political will in the countries where they live. Yet, the potential impact of WHA and WHO action is greatly diminished if the medications remain priced too high and generic versions of oral DAAs blocked for decades by patents granted to originator companies. UN agencies need to do more â in particular, to address the devastating price and patent barriers erected by the pharmaceutical industry.

In July 2012, a global coalition of HCV community advocates **– people with HCV, people with HIV/HCV, and people who inject drugs– and their allies - issued the Washington Call, a platform of principles and demands including to the pharmaceutical industry to drop the price of HCV diagnostics and medications; donors to support community mobilization and treatment literacy; and political leaders to mobilize resources. Since then, the coalition has launched global advocacy campaigns, held community capacity-building workshops, organized meetings with Pharma and high-level policymakers, and used direct action demonstrations and other strategies to increase access to HCV treatment and care. Yet the cure remains out of reach for most people who need it now, and all stakeholders need to do more.

It would be unethical and unforgivable to allow the lessons of the HIV epidemic, such as promoting urgent access to affordable generic medications to meet the scale of the treatment need, to go unheeded. HCV can be cured, now. But it remains only a distant dream for most who need it. We must fight HCV DAA bank-busting price tags, and the intellectual property regime and the industry behind it, that collude to undermine public health.

*Karyn Kaplan is the Director of International Hepatitis/HIV Policy and Advocacy at Treatment Action Group (TAG) in New York. She is the co-founder of Thai AIDS Treatment Action Group (TTAG), and worked on HIV and human rights with grassroots communities in Thailand for 20 years. She is the recent recipient of a Health GAP Global Health Justice award.

**For further information on the global coalition and its campaigns and publications, as well as how to get involved, please visit www.hepcoalition.org, or contact the author at karyn.kaplan@treatmentactiongroup.org