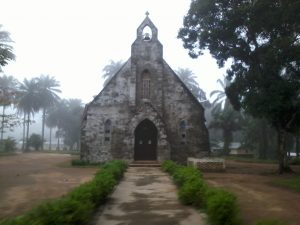 Ebola viral disease (EVD) is the quintessential infectious disease of poverty. It thrives where impoverished humans and animal hosts co-exist in close-quartered, resource-poor settings. It exploits the lack of modern hygiene, the absence of clinical protective barriers, and the compassion of caregivers. Community mobilization plays a pivotal role in EVD control.1  The 2018 Equateur outbreak in the Democratic Republic of Congo (DRC) began in early May. Media sources purport that EVD victims have left clinical quarantine and taken flight to faith communities, and otherwise sought prayers and healing from faith leaders.2

The West African Ebola Epidemic of 2014-2016 sickened more than 28,000 and took the lives of over 11,000 persons, with 11,000 cases and 4800 deaths in Liberia. Near the beginning of that epidemic, the Liberian Council of Churches proclaimed that the Ebola “plague” was a punishment from God for corruption and immoral acts (homosexualism [sic]) and called for prayer, fasting and repentance.3 Here, we review our efforts and the lessons learned from walking alongside the Liberian United Methodist Church (UMC) to inform national leadership, to conduct educational outreach, and to disseminate printed materials—grounded in an ecumenical ethos—among various national and transboundary faith communities. Our experience offers a pathway for incorporating frontline faith leaders of any religion into prevention and control efforts in any society, thereby aligning the goals of those partners seeking health equity.

The United Methodist Church (UMC) in Liberia has around 600 churches, 1,000 clergy and 240,000 congregants in the 15 Liberian counties. Moreover, there are about 16,000 students in UMC primary and secondary schools, 4,000 in United Methodist University, and the UMC operates a national acute care hospital along with primary care clinics in its 22 administrative districts.  To reach these end-users, we developed a booklet covering the natural history of EVD, previous outbreaks, symptoms, transmission and prevention.4  It contained a section of frequently-asked questions regarding transmission, prevention, and protection and was aimed at a general audience in a high-context society, utilizing local idioms and analogies. The UMC Liberia Publishing Team printed 6,000 booklets. Along with emergency food and hygiene supplies, the booklets were distributed in each of the 22 administrative districts around the country with larger allotments to those districts with more churches and clinics, and/or higher school enrollment. It was used in personal conversations, pastoral counseling, meetings with church groups/health committees, congregation-wide training and informational sessions, and in community-wide meetings sponsored by local churches, schools and clinics.

The booklets were shared with other faith communities including Baptists, Catholics and Muslims. Copies were distributed to Methodist partners in Sierra Leone and 30,000 copies printed in French were distributed to Francophone populations in Guinea, Cote d’Ivoire, Senegal, Nigeria, and Cameroon.  The French version was revised, and 5,000 copies tribute in the DRC by UMC partners in 2018. 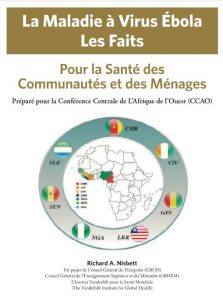 The advent of the West African EVD outbreak was marked by rumors, misinformation and fear-of-the-unknown. The booklet was disseminated when fear thrust faith leaders into health-leadership roles because government messaging was neither helpful nor hopeful. Official government communications were interpreted by locals as “There is no cure; don’t touch anyone or be intimate.” Naturally, the booklets were embraced, offering knowledge for empowerment and informed decision-making, and, most importantly, hope. As the booklets were deployed and re-supplied, those who had seen and used the booklets commented, in the aggregate, that it was “written in clear, simple style,” “easily understood,” was “devoured like it was hotcakes,” “answered our questions,” would have a “lasting role for teaching” and an “enduring impact” on church and society.

Madon et al. 5 aptly described the challenges that poverty poses for global-health implementation science as “a bewildering constellation of social constraints and health threats.” Globally, faith communities are seldom absent where poverty flourishes and faith leaders are often well positioned to act as cultural mediators. Faith leaders have high literacy and numeracy and sustaining commitments to service and provision of care. For example, during the EVD timeframe, members of our team conducted a health-oriented roundtable at a Nairobi, Kenya conference of 18 academicians representing the dozen Methodist theology schools in Africa. The unanimous sentiment was that health was not only a salient development issue for their clergy but also a vital part of their ministry and pastoral care duties. They expressed the desire for more information and training and recognized the need to work closely with public health and clinical partners in the provision of care, prevention and control.

In seeking to treat, prevent and control the infectious diseases of poverty, we must cultivate cultural competence and promote multi-stakeholder alliances; moreover, we must engage and empower faith leaders by including them in program design prior to, or at worst, at the very beginning of, health emergencies. Global-health practitioners in resource-constrained settings characterized by high medical and religious plurality must recognize that faith leaders are critical stakeholders who should be integrated into partnerships and should take an intersectoral and ecumenical approach to health care delivery, surveillance, prevention design and control activities. Though faith leaders are often quarantined, the fact remains that in the face of palpable fear and uncertainty, for people to take refuge in and recourse among their faith communities is both highly rational and predictable. As Oly Ilunga Kalenga, The DRC Minister of Health, wrote once the Equateur outbreak had been officially declared contained in late July 2018: “Church and traditional leaders are your best allies to carry public health messages that require communities to change age-old habits and challenge their traditions.” 6

Frontlines practice requires an expansive, inclusive perspective on medical cosmology, community dynamics, leadership structures, and the role of faith leaders as natural helpers. Best-practices public health offers preferential options for the poor.7  Frontlines practice facilitates social capital formation. When we align with the priorities of faith communities, we not only tap into their trust reserve of social capital as collateral but also we introduce public health perspectives into faith communities which enhances prospects for our shared goal of health equity.