In 2013 the International Association for Research on Cancer (IARC), WHO’s normally cautious cancer research arm, announced that it considers outdoor air pollution a Category 1 carcinogen – that is, the category for which evidence of cancer-causing properties is strongest.   (The full background monograph is available here.)  This turned out to be one of the most under-reported global health news stories of the new Millennium – like the estimate, the following year, that WHO considered air pollution responsible for shortening the lives of seven million people worldwide.

In 2016, a team of WHO researchers led by Annette Prüss-Ustün updated earlier estimates of the proportion of the global disease burden attributable to the environment, concluding that 23 percent of global deaths and 22 percent of global disability adjusted life years were attributable to environmental risks, although obviously only part of this toll reflects the impact of air pollution.  (I’m happy to say that we published a summary of this work in the Journal of Public Health.)  Importantly, the authors made the point that environmental risks are not primarily a problem of poor countries, or poor people: ‘The lower people’s socioeconomic status the more likely they are to be exposed to environmental risks, such as chemicals, air pollution and poor housing, water, sanitation and hygiene.’  This is certainly true of air pollution, with the highest annual mean concentrations of fine particulate matter occurring in low- and middle-income countries, and the highest urban concentrations of those particulates occurring in Indian cities, with high concentrations also observed in cities like Bamenda, Cameroon and Kampala, Uganda.

WHO now appears to be taking air pollution much more seriously.  Unfortunately, its approach reflects the individualized, behavioural approach taken by the organization to noncommunicable diseases as a whole, as this screenshot from its website shows: 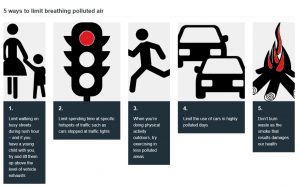 The solution to pollution is to hold you children up out of the car exhausts?  Try exercising in less polluted areas?  (If you live in London, maybe drive to Somerset for your jog?)  One couldn’t make this stuff up.