Planet Earth:  Averting  ‘A Point Of No Return’?

Looking forward, from Netflix movie ‘Don’t Look Up’ ringing the alarm to the One Health approach providing a solution

As we look forward to 2022 (and beyond), the issues we face have become existential. One may well ask, as climate change turns into a climate emergency, whether our home on planet earth can be preserved from environmental destruction. In short, can we avert a point of no return?

In the final moments of the Netflix movie, Don’t Look Up, Leonardo DiCaprio, a formidable environmentalist in his own right, playing astronomy professor Dr. Randall Mindy,  sensing that  Armageddon is near, ruefully utters ‘’We really did have everything, didn’t we?”   His words of disbelief could well sum up a future worldwide regret for the fate of our ‘blue’ planet unless we learn to change our trajectory from a path of self-destruction to ensuring life enhancement of all species and planet survival.

The film is ostensibly a parody of how politicians, media, and the public ignore the reality of the planetary threats facing us – in this case a huge asteroid hurtling toward earth capable of extinguishing all life.  (The last one hit the earth about 65 million years ago, wiping out the dinosaurs).

But the message of Don’t Look Up, considered by some to be the most important movie of 2021, could be more revealing. Parallels with our responses to climate change (neglecting, rejecting) –  including the coronavirus – are clearly at the heart of the storyline. Unquestionably, WE have metaphorically become the comet and, scientists tell us, our species has about ten years before reaching ‘a point of no return’  when the destruction of our biosphere (land, sea, air) becomes inevitable.

There are of course other crisis scenarios of significant global risks that may be coming to a head in 2022 and that we need to treat very seriously rather than with arrogance or indifference.

China, an example of ‘the emergence of a first-rank economic and military power that respects neither democracy nor the rule of law that underpins it,’ tops the list. Seeking to establish  a new world order based on totalitarianism, it is becoming apparent that ‘Beijing intends not only to abide by its own rules but expects others to follow –them.’ Other potential flashpoints in 2022 include Russia’s troop build-up around Ukraine,  Iran’s escalation of its nuclear programme, and North Korea’s disruptive cyberattacks and military threats.

Considered collectively, it is clear that the lead time to reset the world geopolitical Doomsday Clock  (a metaphor created by the Bulletin of the Atomic Scientists in 1947) is even shorter than that for climate change – 100 seconds to midnight – as ‘autocrats everywhere have been using their lockdowns to plot mischief,’ which may, by design or accident, also lead to global catastrophe.

Calling out  ‘rogue leaders’ and  pulling together for planet sustainability

To safeguard our civilisation, global decision-makers who care about the future of the planet alongside the public at large are now tasked to call out (rein in) ‘rogue leaders’ (or political aspirants) who have the power to destabilise, indeed destroy, c. 4.54 billion years of  Planet Earth evolution.  The stakes for not doing so are very high indeed.

Individuals (and groups) in question include those who :

Unquestionably, the United Nations has a key lead role to play here but may be constrained politically and strategically.

One of its main weaknesses lies in the composition of the United Nations Security Council (UNSC) with its core remit to ensure global peace and security.  The main problem is that the same five permanent members with veto power – China, France, Russia, United Kingdom, United States – appointed in 1946 at the end of WWII now represent only about two billion people out of c. 7.8 billion. Close to 1.3 billion in  Africa and 1.4 billion in India alone are not permanently represented although some of the poorest and the most disadvantaged live in these regions and will be most affected by climate change.

Covid-19 reminds us that the only way we and particularly Heads of State can achieve planet sustainability is ‘to pull together’ and ‘to stop behaving as if we live in a limitless world.’ It also challenges us to consider what kind of future we want and how to achieve it.

Important initial  steps toward ‘a more just, sustainable and peaceful world’ would be:

History has clearly shown us over millennia that free societies tend to flourish while those that dictate or enslave fail or have short lifespans – socially, economically, politically.

A recurring theme of my previous Impakter articles is that our greatest challenge as a species is to adopt a new mindset / mental models that shift our thinking, policies, and strategies from human-centrism (it’s all about us) to eco-centrism: it’s about all species and the environment and the sustainability of the planet.

This pressing paradigm shift – defining a renewed moral purpose? – in our worldview is encapsulated in the concept called One Health  (& Wellbeing-OHW) that recognises the critical interdependence of humans, animals, plants in a shared environment. The  underlying point is that the planet will thrive without us but will surely perish if we continue to erode ‘the fabric of the ecosystems which sustain life on earth.’

There is no Plan B for climate change. We either get it right in the forthcoming decades or we disappear. Simple as that!

The same holds true for other global threats – nuclear war, deadly pandemics, food security and others if pushed to extremes. The United Nations remains our best hope for a sustainable future but changes would need to be made to ensure that all nations have an equal voice and are able to speak freely about their challenges unencumbered by political interference or economic manipulations.

Recommendations flowing from this commentary include the need to:

(1) restructure the composition of the UNSC to ensure that the veto power of future permanent members (some conditional) does not lead to political paralysis, that all regions are fairly and equitably represented in terms of numbers and needs, as determined by annual reviews of risks and SDG progress, and that members are held publicly accountable in terms of enabling global peace, security and sustainability.

(2) adopt the One Health & Wellbeing concept/approach and establish a UN One Health and Wellbeing Sustainability Council with a strong Youth voice (e.g., representatives  from the Sustainable Development Sustainable Solutions Network-Youth) to review and operationalise global propositions for global sustainability (socio-economic, geopolitical, environmental – aligned with the OH concept and the SDGs (summarised below) : 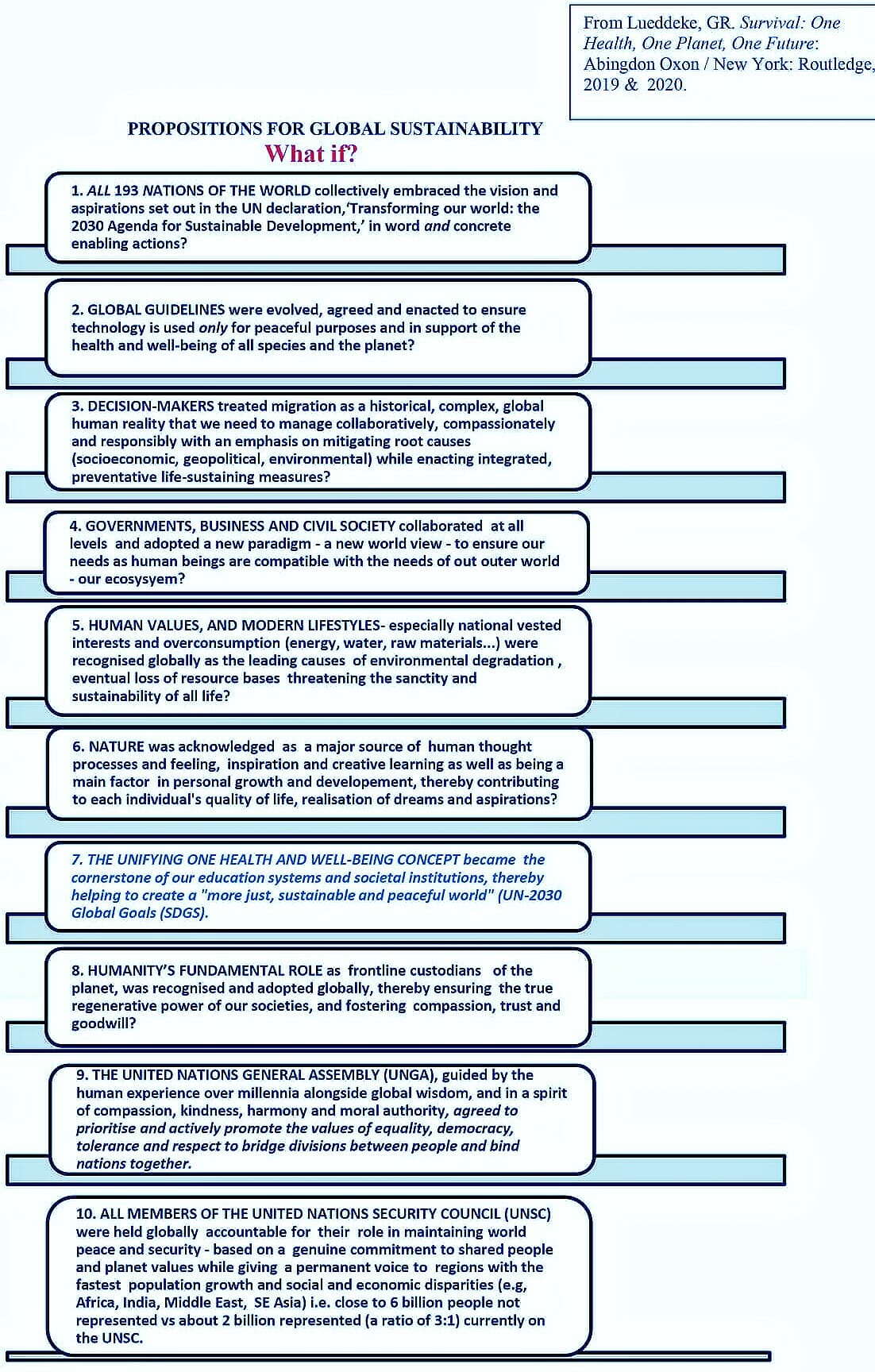 (3) promote the OHW concept and the UN SDGs at academic, government, and at all societal levels across all global regions through a process of change and education – formal and non-formal – addressing challenges we face in particular how we can better relate to the planet and to each other.

Our choice in 2022: Accept societal transformation or face extinction

The world faces hard choices in the days ahead. After 13.5 billion years of evolution from the Big Bang to the present, in 2022 we are at a turning point. Our choice is stark: acceptance of the societal transformations required to sustain the planet or face possible extinction as a species.

Considered ‘a modern-day heir to Charles Darwin,’ after a lengthy career, evolutionary biologist, conservationist, world-leading naturalist and author of more than 30 books,  Edward O. Wilson (1931-2021) ‘felt optimistic that humanity had ‘the potential to solve its crises.’ On the other hand, he cautioned in 2019 that ‘our species was dysfunctional’: we  carry Paleolithic emotions, we still depend on medieval institutions and have acquired god-like power – ‘a very dangerous and unstable combination.’

Cover Photo: Last scene from Don’t Look Up as the comet plunges toward Earth (screenshot) – film streaming on Netflix.