The fortification of salt with iodine across the world has led to a remarkable and unique public health and economic success story which is little recognized. It is estimated that some 720 million clinical cases of iodine deficiency have been cured and prevented. Annually some 20.5 million neonates are prevented from having iodine deficiency. From an economic perspective the biggest impact is through the prevention of brain damage and IQ loss in children (8-15 points) potentially preventing a loss of tens of billions of dollars worldwide due to lost learning ability and thus earning potential.

This achievement came about through a series of steps involving the building of a solid scientific case for action, followed by several United Nations resolutions leading to global recognition of the need to iodize salt. Donor governments supported the United Nations’ work to implement programmes in deficient countries.  A crucial part of the success story was the active involvement and commitment of the salt industry, as well advocacy, engagement and financial support provided by civil society organizations such as Kiwanis International. 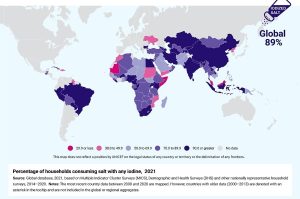 …not to be taken for granted

However, WHO reported that in 2020, the number of deficient countries rose to 21.  Furthermore, just 23 countries with recent data had coverage of 90% or higher, and WHO noted that status among other population groups, such as pregnant women, is uncertain, with implications for the brain development of their children during pregnancy and early childhood. And while in many countries salt iodization is well regulated, and salt producers continue to provide adequately iodized salt, there are also countries where production is slipping or where it never reached the desired level. In some countries monitoring systems are not functioning, and data are lacking to take informed action, or resources to support national programs are insufficient.

But it’s clear that the rise in the number of deficient countries, as well as the lack of data, mean we must continue to be watchful and not forget about the problem.

The reasons for the global success were clear – as are the causes of the decline.  Nutrition programs have a broader focus – the issue of stunting, the problems with food systems, the rise of non-communicable diseases.  Changing dietary patterns such as the increased global consumption of processed food, and the push to reduce salt consumption affect iodine consumption.  Government management systems for the control of salt iodization are often outdated and ineffective. 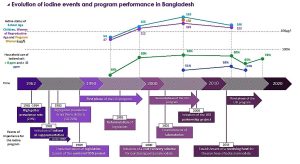 So while the approach has been successful, some 20 countries – or perhaps even more – are still deficient.  Some 80 countries have no recent data, and often no data at all on disparity; national iodine surveys are costly and there are other health priorities.

What do we do?

The illustration above shows how looking at a programme since its inception can help us to track down the bottleneck areas hampering national availability of iodized salt.  These include problems relating to programme management structures and monitoring; differences in product quality and supply chain issues; the importance of cross-border trade; and the need for government and public awareness as well as resource allocation.

Our focus of attention and action should include support for the 21 countries where iodine intake is insufficient, identifying and removing obstacles to salt iodization. Broadly, we must improve data availability on iodine status as well on key components of national salt iodization efforts (e.g., management, import and production control) so that countries can take appropriate action with a focus on continuity. And we must strengthen advocacy and communication efforts to increase and maintain awareness among policymakers, salt producers and traders, and the general population.

Where are the world’s deficient countries?